The DfE have recently reinforced the need “to create and enforce a clear and rigorous expectation on all schools to promote the fundamental British values of democracy, the rule of law, individual liberty and mutual respect and tolerance of those with different faiths and beliefs.”

The Government set out its definition of British values in the 2011 Prevent Strategy.

Our School reinforces these regularly and in the following ways.

Democracy is a cornerstone of British society. The children learn about the origins of democracy through their curriculum work on Ancient Greece in Key Stage 2.

They have the opportunity to see democracy in action as each year each class elects two School Councillors. They must prepare a manifesto and make an election address to their peers before a secret ballot is held.

Through curriculum work children often have the opportuntity to discuss current events both locally, nationally and internationally and reflect upon how life in some places is very difficult as there are not free and elected Governments.

They have become involved in campaigns such as ‘Send my Sister to School’, and rainforest depletion as well as local issues such as developing the Welfare Field. This has involved the children writing to and getting involved with elected agencies such as the Parish Council, meeting our local MP Mr Guy Opperman and writing to and getting responses from the Prime Minister and the President of Brazil!

During the 2015 General Election the children explored the process of voting to elect a Government and sufferage for women, including finding out about Emily Davison, and looked at the different political parties and some of their policies before holding their own mock election, complete with ballot box, counters and Returning Officer.

They provided an interesting result! 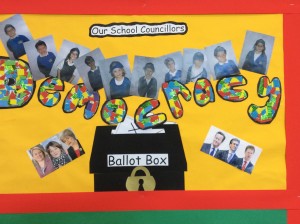 In September 2015 Mr Opperman MP returned to our School and discussed with children at length the meaning of Democracy, and answered some very tricky questions. 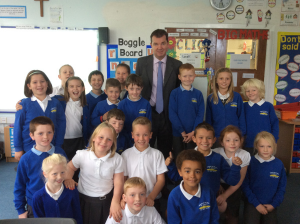 He wrote on his blog –

“The children asked great questions including some really tough ones like:
– Does the Queen always agree with the government? This was a tough one both to explain and demonstrate to a First School. I hope I did her Majesty proud in my explanation of how she rubber stamps legislation, but cannot block it.
– Do you have your own seat in parliament? No – but the whip always sits between the Speaker and the Prime or other Minister on the front bench
– Do you get on with other MPs in parliament? Yes – some Labour ones are open and normal and I am close to, and I have genuine mates on the Conservative side. We are all taking a while to get to know the new SNP team, and there are not many Liberals left.

One final point to add about Heddon First School: it is one of the schools that is leading the way, amongst the many schools in my patch, in the ways in which they use the internet and social media to interact with parents, pupils, and the wider public. They have an active Twitter site, and very good website that is a mine of information: http://www.heddon-school.co.uk/
This is, in my view, the way ahead for any school in the 21st Century. Parents and pupils like it and it is a great way to reach out to and be integrated into the community.”

The Rule of Law

The importance of Laws, whether they be those that govern the class, the school, or the country, are consistently reinforced throughout regular school days, as well as when dealing with behaviour and through school assemblies.

Children are taught the value and reasons behind laws, that they govern and protect us, the responsibilities that this involves and the consequences when laws are broken.

The children are taught that while people may have a number of rights under the rule of law they also have a similar number of responsibilities to themselves and others.

Within school, children are actively encouraged to make choices, knowing that they are in a safe and supportive environment.

As a school we educate and provide boundaries for young children to make choices safely, through provision of a safe environment and empowering education.

Children are encouraged to know, understand and exercise their rights and personal freedoms and advised how to exercise these safely, for example through our E-Safety and PSHE lessons.

Whether it be through choice of learning challenge, of how they record, of participation in our numerous extra-curricular clubs and opportunities, children are given the freedom to make choices.

At Heddon School mutual respect is at the heart of our values.

Jesus said, ‘Love you neighbour as you love yourself’ Mark 12:31

Children learn that their behaviours have an effect on their own rights and those of others.

All members of the school community treat each other and their environment with respect.

Respect and celebration of those of Different Faiths and Beliefs

As a Church of England school we are here to provide an education for children of all faiths and no faith.

Heddon is situated in an area which is not greatly culturally diverse, therefore we place a great emphasis on promoting diversity with the children.

The school has achieved the full International School Award in recognition of work done to create links between the children in our school and those in different countries across Europe. This international work has expanded the horizons of the children to see how other people live in other places and to celebrate this difference. 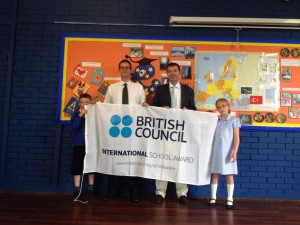 Children learn about other faiths through the curriculum and often either directly or through the inclusion of stories and celebrations from a variety of faiths and cultures. Through Religious Education children have the opportunity to explore other faiths and where possible to speak to members of that faith and visit their place of worship.

The school has worked very hard to develop a good relationship with our local Jewish community. 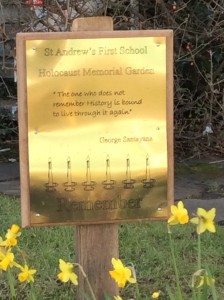 Heddon On The Wall St Andrew's C of E Primary School. Northumberland. Where every child matters. Proud to be part of the @PeleTrust

Proud to be part of the @PeleTrust
#HeddonOnTheWall
#Northumberland #Education

A visit to Bays leap farm.